Due to numerous earthquakes happening nowadays around the world and their very unpleasant aftermath, the Philippines due to it is also one of the countries included on the so-called “Pacific Ring Of Fire” is declaring the 594 lots or the buffer zone areas near the West Valley Fault or the formerly known as the Marikina Valley Fault line, as a nonresidential zones or housing projects should not be erected on these buffer lots to avoid further damages and fatalities cause by a strong earthquake. For because it is near the West Valley fault System, any housing project erected by this buffer zone be shallow by the ground when a ground rupture happens during a strong earthquakes. 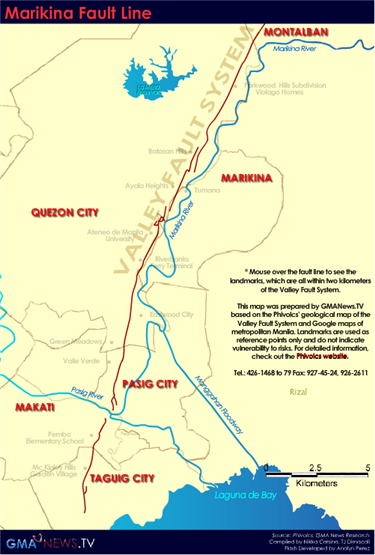 However, for those who have already residential or commercial estates on the buffer zone or on the lots ban by the Quezon City government, it is advisable and recommended to evacuate or move out from their estate properties to avert impending earthquake disaster upon them and their properties. Actually, according to the reports, the Philippine Institute of Volcanology and Seismology (Phivolcs) have already informed the estate owners on the said 594 lots on the buffer zone regarding the Valley Fault System and the effects of a strong earthquake on it.

A fault line is a fracture or crack on earth’s crust or the surface of a land that could lead to big chasm if a strong earthquake strikes.