Bukidnon Philippines’s capital city which is Malaybalay Bukidnon is dubbed as Bukidnon’s “little Baguio” because of its resemblance to Baguio Philippines which has a fine forests.

Aside from its Baguio-like capital city, most tourists could also visit and take a spiritual retreat at Bukidnon’s lovely Mt. Kitanglad, which kind of have a resemblance of Sagada Philippines’ mountain experienced.( Speaking of spiritual retreat, you could held it also at Bukidnon’s Monastery Of Transfiguration).However, Mt. Kitanglad is the second tallest mountain in the Philippines, second to Mt. Apo the tallest mountain in the Philippines. You could scroll its beautiful sceneries and ambience through horseback riding, if you like. However, if you are adventurous tourist like you like mountain climbing activities, its local government patronizes this kind of activity on Mt. Kitanglad. However, aside from Mt. Kitanglad, there are also two major mountains in Bukidnon, namely, the Mt. Kalatungan and the Mt. Tangkulan.

River-rafting is also patronized on Bukidnon’s bodies of water especially at Pulangi River which is one of the longest rivers in Bukidnon. Aside from Pulangi River, there are other five major rivers at Bukidnon which can be enjoyed by tourist if they like river-rafting adventure, namely, the Manupali, Tagoloan, Bobonawan, Cagayan, and Muleta Rivers.

Furthermore, pineapple is not only the crops that grow on Bukidnon’s fertile lands, Bukidnon Philippines is also well known as a major producer of rice, corn, bananas and sugarcane. So if you are visiting Bukidnon, do not just look and pick a pineapple into your shopping and souvenir list, try also their corn, bananas, sugarcane and rice. For if their pineapple is sweetened by its fertile lands surely Bukidnon’s other crops are also well mothered. That is why it is called the paradise of Mindano Philippines. 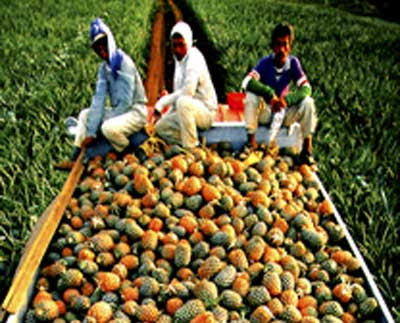 There are also other places of interest in Bukidnon Philippines; there is the Mangima Canyon Park, where of course you could a river canyon and an Olympic size swimming pool, as well as a relaxing resort. There is also the Del Monte Golf course for golf lovers, and the Sumalasag Cave for cave adventure lovers