Who is among the Filipinos who could not remember “Ondoy”? Ondoy was like a mighty man who cast out all it has on a one Big One Night Stand. Yes, a One Night of heavy spilling and blowing its mighty strength upon the navel of Philippines’ Luzon Island that resulted into massive large flooding and casualties. A one night mighty typhoon that marks on Philippine typhoon history wherein it shatters a lot of Filipinos lives and livelihood and not sparing even Philippine celebrities in just One Night.

Everyone was caught in a surprise by this super One Night typhoon wherein the Philippine Atmospheric Geophysical and Astronomical Services Administration or PAGASA have not exactly forecast its forthcoming and have fore warn the public, thus so it goes, Ondoy stealthily creep in and pour its fury in just one night where everyone is not expecting its forthcoming and escape or slide away after it devastate too much the Luzon part of the Philippines. What a cunning typhoon!

This super typhoon also marks a history in Arayat Pampanga Philippines wherein for the first time the town of Arayat have experience a landslide which killed 12 people brought by the typhoon Ondoy. The landslide basically happens near the foot of Mt. Arayat at purok 6 San Juan Bano Arayat, as it was reported. This is just one disastrous effects of the super typhoon Ondoy,for there are a lot of stories to tell like the Philippine celebrities Christine Reyes and Jean Garcia whose house were devastated by the typhoon which cause them to be stranded on their own respective homes. 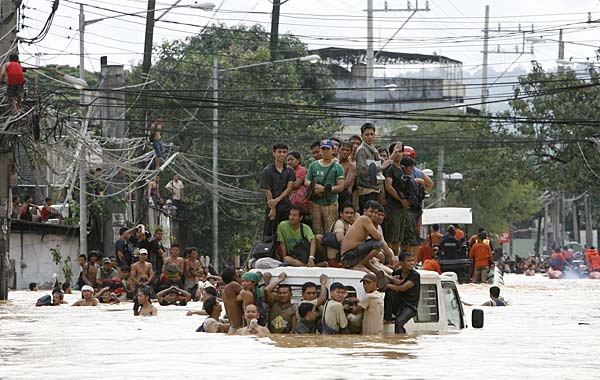 Typhoon Ondoy or so-called typhoon Ketsana which was internationally called caught the Philippines at the night of September 25,2009 which reveals its deadly fury the morning after and which caused 464 deaths in the Philippines which up until those who have been hit and traumatized by this typhoon still felt the pain it cause them yet still some never leave their own devastated homes rather they renovate them and added another floor on their house to get ready for another Ondoy in the making in the future. For the Philippine Atmospheric Geophysical and Astronomical Services Administration or PAGASA still could not have such high-tech facilities that could predict another Ondoy because as they complain, according to the reports, there is no too much funds allotted to them by the government and some high learned officials of PAGASA were resigning and transferring into another country because the salary in PAGASA is just low or minimum for the important service they give to the public.