OFWs On The Rocks

The sudden outburst of news regarding Overseas Filipino workers being pressed on their works, exploited, on troubled waters and on the brink of death really overfills the pages of Philippine newspapers, especially the front and primary pages or fill-in the hot headlines news in the Philippines. Such kind of news regarding the fate and life of overseas Filipino workers abroad is not something new but what is surprising and shocking is the continual pour of woes unto them, like the growing number of OFWs being sentenced to death or on the death rows because of drug-trafficking case being filed against them wherein they utterly claim that they are innocent and just exploited victimized by the hidden world drug syndicate that victimized Filipinos; as well as the Filipino workers that are pressed in the middle of political chaos in Egypt and Libya wherein they encounter difficulties escaping the pressure on the work place they are in to come home back in the Philippines. 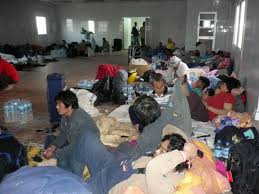 These Overseas Filipino Workers bad experiences and stories while they work far away from their homeland is another proof that working as an alien on a foreign country is not really advantageous and worth working for because you are not their racial brothers or sisters, unless you change your nationality into the nationality of the foreign country you work with. For being an alien worker in a foreign land diminishes your human rights and benefits but unless you are a foreigner in the Philippine archipelago wherein the treatment is reverse; For in the Philippines, foreign are treated well and high because Filipinos are said to have a hospitable character.

There are only few Overseas Filipino workers that become successful in their works abroad relying only on themselves alone without the help of a relative living and nationalized on the foreign land they work with. For most successful renowned Filipinos abroad have foreign relatives that helps and supports them or have a foreign spouse.

As an Overseas Filipino Workers, being able to come home back in the Philippines alone is already a blessing even though one do not have a balikbayan box to give to his or her family; but however, it is more rewarding for an Overseas Filipino Workers of not only to be able to come home safe and alive but also with balikbayan boxes or gift surprises to his or her loved ones to show or as a proof that his or her sacrifices abroad paves off or have gain fruits.