1. Finally Cleared. Former first gentleman Jose Miguel “Mike” Arroyo is finally cleared from the Helicopter scam through the rescue of his own brother, Negros Occidental Rep. Ignacio “Iggy” Arroyo and the scam was thrown back into the accuser Lionair president Archibald Po. However, the anti-GMA supporters still believe that it is Mike Arroyo who owns the choppers though they have no solid evidence and plausible proofs to prove their malice and allegations, as usual.

2. The Maguya Report. Still can’t get over the so-called “2004 Election fraud”, Bayan Muna Representatives Teodoro “teddy” Casino and Neri Javier Colomenares cries that there is a “cover-up” to cover cheating activities after a so-called Mayuga report was declassified by the military on the public though they never state in details what’s in the report.

But the military who declassified the report contradict the cries of the Bayan Muna representatives and insist there was no “cover-up” and even speaker Feliciano Belmonte Jr. said that the Mayuga report has no bearing or connection to the 2004 election fraud regarding the so-called switching of election returns (ERs).For, he said, that the Mayuga Report was written way back then before the purported ER switching activities took place.

However, the Anti-GMA paranoids still insist there is a “cover up” or connection: “.Akala mulang wala,pero Meron! Meron! Meron!..” ehehe.

3. Welcome Back Dengue! Accept it or not, ”lamok”(mosquito in tagalong/Filipino dialect) will always come back to bite and sip YOU! It seems, dengue become already an endemic disease in the Philippines and will not let go the Filipinos from its favorite list of yummy blood to be suck or sip.

For another wave of dengue outbreak swarm the youngsters in the Philippines only this week again and continue plaguing the nation. And as usual, the Department of Health (DOH) is busy again to combat this seemingly uncontrollable mosquito attack.

Up until this week, the dengue outbreak is still inflicted mostly the children and the rate of deaths caused by it increases.

4. Paris in Manila. The famous American heiress and media personality Paris Hilton set foot on the Philippine land for a five day visit to grace the invitation of Century Properties to help them design the beachfront residential property project Century Properties would like to erect or build; it is called Azure Beach Club project. It is a residential community at Paranaque city that features “beach lifestyle”

Furthermore, she is also here in the Philippines to attend the opening of a luxury store at SM Megamall that sells luxury hand bags and accessories named after her name – Paris Hilton Store. And even to meet her boxing idol – Manny Pacquiao. 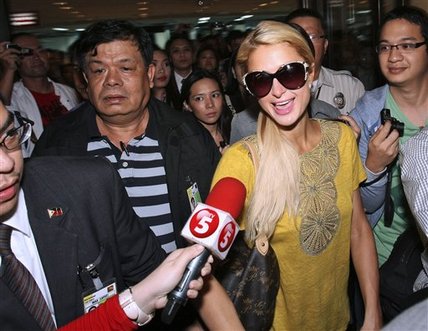 As of this time, there is still no definite clue and suspect why Mangudadatu was attack.