A fact-finding report regarding the hostage drama have already been made, according to Malacanang and there are thirteen personalities including the top three TV networks were blame for the fiasco minus PNoy who supposed to be charged also because he is the Commander in Chief. The fact-finding report gain some protests from the lawmakers but PNoy have ignored the petition of the lawmakers and the opinions of the Filipino public (contradicting his own mandate to serve the Filipino people) and rushed the report to the Chinese ambassador to the Philippines. 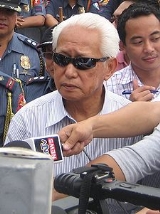 Alfredo Lim - one of the accused

PNoy on the report

Now the fact-finding report seems to be bias because he was not included on the ones who are responsible for the fiasco, though he admit publicly that he is responsible for it and were sorry that he and the PNP have made mistake where he seems to renounce what he have said (how the change of mind?), and though obviously he should be included, else he is not the President of the Philippines.

What was actually his orders regarding the incident wherein the accused ones have violated (to justify that he is innocent and not responsible for the fiasco), which give him justice not to be included on the ones to be accused?

Do they violated his seem to be good orders from the very start, thus the blame should not be on him? Or this is just a whitewash and excuse to excuse him and save his reputation and administration? Is his administration sacrificing some accused ones which are close to him so that he will not be included, or will save his administration from shame?

Thus, he says, “My first obligation is to the people, not to friendship, relatives or party men”.

Really PNoy? If so, why do you appoint close friends, relatives and fellow party colleagues as your cabinet members? And what about the fact-finding report which did not show first to the Filipino public but hurry to show it first to the Hong Kong Chinese government?

PNoy is starting to eat his own words, day by day of his administration. Let’s wait for another eating back what he has already spewed out.