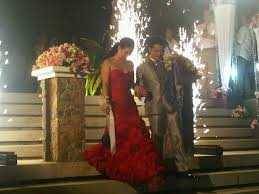 Before Mr. Ogie Alcasid and Ms. Regine Velasquez exchange vows, their relationship is in secrecy from public scrutiny because Ogie Alcasid was known by Filipinos to be married for along time with former 1994 Ms. Australia and contestant of Miss Universe 1994, Michelle Van Eimeren. Thus, it would be scandalous for both parties if the public have known their secret relationship.

However, it was eventually known before they decide to wed which of course sparks controversies and curiosity of the Filipino mass about Michelle Van Eimeren’s reactions to the relationship of her former husband Ogie Alcasid to Ms. Regine Velaszuez. But it was quickly ironed by the revelation of Michelle Van Eimeren that her marriage with Mr. Ogie Alcasid was already nullified and she now have a new husband name Mark Morrow, which only proves that marriage of a celebrity couple sometimes or always do not end up happy and forever; as if their pompous and movie like romantic wedding is just a film shoot to entertain their fans. 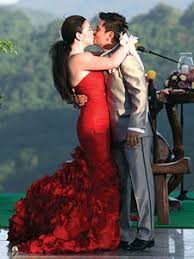 Take note, Mr. Ogie Alcasid’s new marriage is another celebrity wedding for him marrying a celebrity woman again, if he wanted to try again such kind of marriage. Let him prove that Ms. Regine Velasquez is not the new Ms. Michelle Van Eimeren in his life.

By the way, Mr. Ogie Alcasid is the famous singer-songwriter-movie actor in the Philippines that produces OPM (Original Pilipino Music) hits like : “Mahala kita Walang Iba” (You The One I love),”Nandito Ako ( I am here),”Kailangan Kita” (I Need You),”Bakit Ngayon Kalang?”(Why Just Now?),”Kung Mawawala Ka” (If You Will Be Gone), and many other hits. He is also a movie actor that has done many films or movies in the past. Similarly, Ms. Regine Velasquez is also a singer-movie actress in the Philippines except only she is not a songwriter but just an interpreter.