Games in the Philippines

Filipinos have also distinct but somehow colonially influenced favorite’s games. Before basketball become the hit Philippine Game being loved and embraces as the country’s favorite Filipino games today where every barangays in the country and in every corner there is a basketball courts, there are a lot of street games, card games, and native games that Filipinos formerly were crazy of.

Some of these are the card games “Pusoy Dos” and “Tong-Its”, which somehow today Filipinos still play it even those financially poor Filipinos. But Filipino Pusoy Dos is not similar to a Pusoy Poker Card games which is the Chinese Poker or Russian Poker, for they have a different rules and ways to play it. You could check the details of their rules or how to play them on the net if you like. Another Filipino famous card game is “Tong-Its”. “Tong-Its” is a rummy card game originated from Northern Luzon. Both of these two Philippine Games or Filipino card games are still widely played by those Filipinos who does not anything to do in their free times. Another non-physical games which Filipinos habitually or used to play at their free times are “dama” (a famous board games with a resemblance to chess board games, chess board game, and the sungka or somewhat called Chinese checker games.

However, aside from card and board games, there are also street games which Filipino children loves to play, which are dubbed mostly as native Filipino games. For before electricity and technology come into the knowledge of Filipinos, even adult Filipinos play these street games.

Some of these are: (1) Tumbang Preso – this game is played with one slipper and one empty can. The goal of this game is to hit the empty can with your slipper as the weapon, and I know to gain also other weapons or slippers from your opponents. (2) The famous Patintero or so-called “Tubigan or Harangang Taga” (Three Nights), which even the adult Filipino loves to play it until today. The rule of the game is to hinder your opponents to penetrate you main base. There are two winnings, that is, if your team is able to hinder all the penetrating teams from entering all your bases, your team wins. But in other hand, if the penetrating teams could penetrate your entire base, they are the ones who will win the game. (3) The Palo Sebo (Greased Bamboo Climbing). This Filipino game is usually played during festivities. The goal of this game is to reach the prized bag on top of the greasy bamboo pole. (4) The childish Piko or Buan-Buan (Moon Hopping) games. Players hop in their moon base divided into part. This is a cute childish games which I enjoy watching little girls hopping upon their moon base. (5) The Luksong –Tinik (jump over Thorns) game. Among other native games, this is a traditional game like Patintero which children a way back then loves to play. 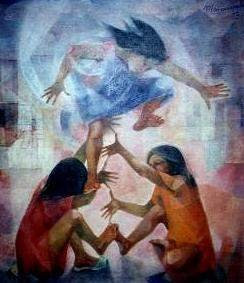 What I mentioned above are just a handful of many Philippine games Filipinos children and adult alike loves to play, from native to contemporary games.