Un my opinion, I don’t trust much Philippine police because sometimes they attack their own assets and use them as their sacrificial lamb for their own mistakes or sins, just like for example about the rub-out cases and the ambushes of alleged car napping groups wherein they massacre them with their bullets not considering the innocent people that will be affected by their actions. This is Horrible!

Similarly, this is also done in Philippine military camps because the Philippine police force is directly connected to it, wherein I suspect that the brutality and bestial acts originated and derives from the hazing activities,”pahirapan”(made to suffer),and hard punishment systems of the military police academy or schools in the Philippines, as well as what was done on ROTC course on colleges and universities in the Philippines. But where do they have this mind-set to put into great suffering a cadet or a neophyte? 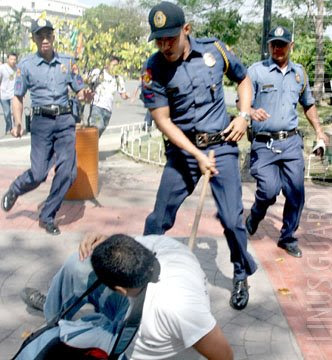 I bet this comes from international military group elites who oversee military and police tributaries in the world to impose a reptilian (bestial) way of disciplining their cadets. This is indeed not good! ; For the reptilians are working against the human race which some humans unknowingly know about their secret stratagem.