Not only Manny Pacquiao have invaded the boxing limelight and commercials in the Philippines but also now with a limited collection of wrist watch dedicated and in honor of him (as if he is already dead, ahahah) or as his own watch – a Pcquiao watch created by the Swiss Brand Victorinox Swish Army that produces truly handsome manly wrist watches.

It is a sports watch of course because Manny Pacquiao is a sports icon wherein it comes now in three series of collection where Manny’s face, fighting fists, boxing moves and Philippines flag symbols, like sun rays were etched on the wrist watch, as of course a design of it being it as a Pacquiao watch. 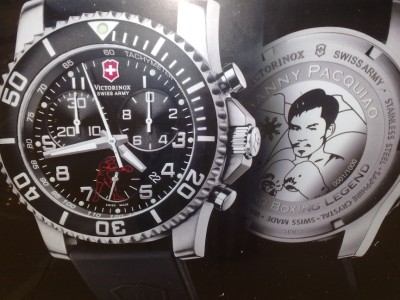 The first two series, according to Victorinox was sold out quickly that they quickly install a 3rd series of Pacquiao’s watch that comes in a Chrono Classic edition having a price of Php. 22,800 each that comes with souvenir boxing glove with Manny’s signature imprinted on it.

It is indeed a honor for fellow Filipino like Manny Pacquiao to be included in the collection of their wrist watch which really another achievement for Filipinos because Manny is the first Filipino to be used by the Swiss brand watch in their designs for their watches.

Truly, this is financially viable because many love Manny. Kudos to Victorinox for a brilliant idea; truly Manny is bankable and profitable product.