Car Toys For Young and Old

Toys are of course not only for children’s only but also for adults; it depends what kind of toy one is playing, it could be sex toys which are not of course recommended for children to play with or they are toys not for children but for adults only. However, the word “toy” has become more synonymous to children‘s kind of entertainment nowadays which adults no longer do like playing dolls and cars and robots. But that is only a mere modern societies stereotyping regarding toys which do not always applied. Just like the Shell Ferrari car toys which both children and adults loves to have one and loves to play with.

Pilipinas Shell has bring back for the third time the Ferrari car toy collectibles with more playing capacity for car toy enthusiasts and collectors and kinds to enjoy and have fun with. It has 15 programmable commands underneath each toy car or with brand new buttons to play with.

Shell has been doing this in partnership with Ferrari cars for the longest time and has been doing well as their source of additional profits aside from providing vehicle fuels for motorists. According to Pilipinas Shell Fuels brand manager Rona Baes they are doing these as their reward for their customers: “….we reward our customers with these well thought out collectibles that appeal to all ages. it even makes for an early Christmas gift…”

There are seven programmable Ferrari toy cars customers could avail with

1. Ferrari 430 Scuderia – this incarnate Ferrari model toy car was actually inspired by the seven time Formula One world champion Michael Schumacher. This toy car is distinctively sporty in its style and appeal and it is simple and light weighted toy car with engine and exhaust sound effects. 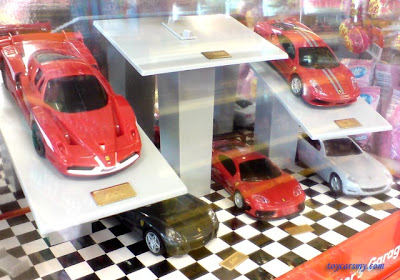 2. Ferrari 599 GTB Fiorano – this car is said to be the most powerful Ferrari car.

3. Ferrari FXX Evoluzione – a Ferrari car that have constant improvement.

5. Ferrari 612 Scaglietti – this type of Ferrari car is the second all aluminum vehicle.

6. Ferrari F2008 – it is a single sitter Ferrari car that has been at the Formula One World Championship.

There you go the latest Shell Ferrari car toys collection which children and adults could enjoy.