The fluctuating rate of vehicle oil fuels on the oil market which affects greatly fares on passenger vehicles has prompted some to come-up an alternative idea to fuel their vehicles than just entirely relying on oil fuels being sold on the oil market that only gave them a heavy yoke to carry on their backs. The alternative fuel they have come to thought about is electricity. However, assimilating on this kind of energy to run a vehicle is not quite economical as some inventors of electrified vehicles suggest, because in our modern world, electricity is also under charge and not free. Perhaps, those drivers who have only guts to pay electricity bills have the access to this kind of alternative automotive fueling. It is somewhat also costly because of the amount of watts you transferred to your vehicle batteries. The bigger the watts you consume, the bigger also the bills you will pay, is not it? Moreover, not to mention the watts you use daily for your electric home appliances.

Anyway, aside from electric jeep or e-jeep, Pinoy inventors have come up and invented another passenger vehicle which most Filipinos used to ride daily on their daily commuting and transporting activity aside from passenger jeep, that is, an “e-tricycle” or electric tricycle. However, it is alternatively called “E-trikes”.

E-trikes or electric tricycle debut 20 pieces of it at the streets of  Mandaluyong city this month of April to introduce it to the commuting public with charging stations that only cost P45 per charge that E-trikes drivers don’t have to recharge most of the day compare to oil fuels to an ordinary oil-run vehicles that you have to charge either twice or thrice a day depending on how far you drive a day; for just only one charge of this E-trikes which only cost P45 could make your day (24 hours) and could save your money from recharging. 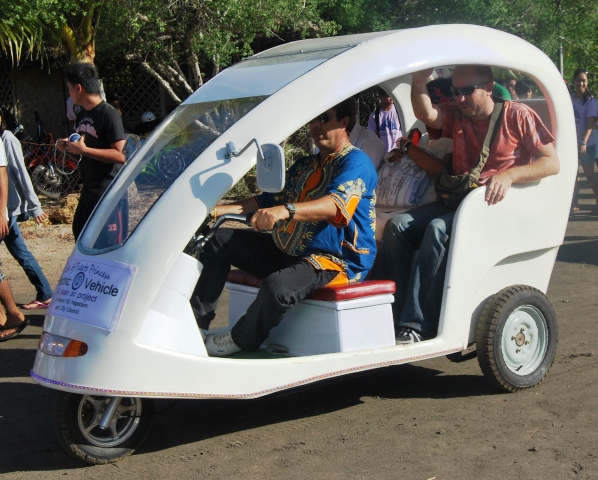 If this test run could be a hit to a commuting public and could really minimize the Philippine problems regarding oil prices or could save the Philippines a million dollars from expending foreign import oils, the Philippines will deploy 20,000 more E-trikes from Asian Development Bank (ADB) who funded this electric powered tricycles project.

Yes, if this project will really works and it is proven effective on reducing Philippine expenditures and could help the environment from smog emanated by the combustion of oil fuels and could help gain satisfying income for E-trikes drivers as well as gratifying rides from the passengers on the streets; for sure this is the start of economic progress in the Philippines.