Climate Change in the Philippines

Planet Earth is slowly dying.  Its imminent demise is brought about by climate change, a phenomena of global magnitude.  The destruction of the ozone layer has caused this change in modern climate; and it has caused a devastating effect the world over.  The polar ice caps is slowly melting and is bound to trigger a worldwide innundation.  Hundreds o thousands of kangaroos died in Australia.  Flash floods killed thousands of people in Indonesia, and just recently, in the Philippines, where for the first time, the country has experienced a country-wide floodings.  Tthe Amazon Rriver is drying up that resuts in massive fish kills.  Tsunamis have nearly destroyed Malaysia and Maldives, and many extinct volcanoes are becoming active again.

If we, the people of the earth, would not do something about it, then we are seeing the last generation.  It is the time we unite together and come up with solutions to stop this deluge.  We should set aside political bickerings, and misunderstanding among countries, and focus our attention on this one problem that brings our world to a deterioting scale. We should stop ravishing Mother Nature because we are already feeling its scourge.  We should do away with toxic chemicals that destroy the ozone.  We should recycle our garbage instead of dumping it in vacant lots or in rivers.  Polluted rivers should be rehabilitated.  And its time too, to change our lifestyle.  Its time that we go organic.  It doesn’t only ensure us of a healthy lifestyles, but we also help in preserving the ozone by not using chemicals in spraying vegetables and fruit-bearing trees and in feeding livestocks. 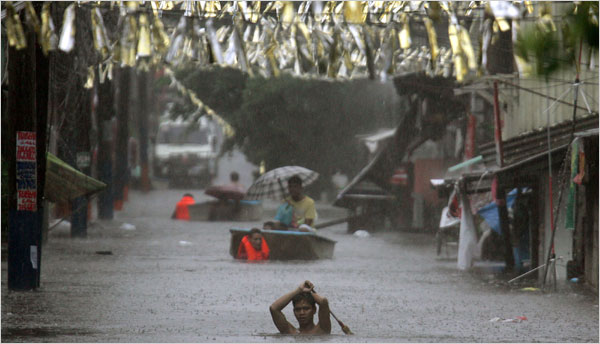 I believe that there is still hope for our world.  If we could only band together, and do our share, we can still save our planet from the destructive effect of climate change.