Alternative Means To Lighten Up The Dark Day

Aside from the misery of penniless, poor shelter, compromised health and sanitation, overcrowded spaces, and lack of food to eat; some residential squatters and very financially destitute families grope inside their shanty dwellings though the King sun is up there shining brightly in a day. However, in the Philippines, some of this type of class of family put an end to the darkness that rules their dwellings 24/7 (24 hours and 7 days a week) without spending a penny for the electricity bill, yet the temporary light is as almost equal to a fluorescent bulb as the residents who have use such alternative to lighten their dwellings, testified. They are the residents of San Pedro Laguna Philippines (and perhaps so far not only Laguna but also on other parts of the Philippines now since its usage and promotion in the Philippines) who were the first people in Asia to use such alternative Green technology.

This light alternative which is truly light the house and light the budget for electricity and lighten up one’s life which cannot be dismiss lightly in terms of energy conservation and money savings, is the so-called “Solar Bottle Bulb” designed and developed by students in the Massachusetts Institute of Technology (MIT); campaign by Illac Diaz of My Shelter Foundation in the Philippine “……to provide the whole country [ the Philippines ] with sustainable light energy and bridge the gap between social classes…”[-Diaz ] and to help his fellow Filipinos lighten up their monthly electricity bills. 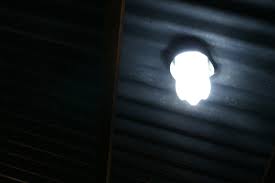 The solar bottle bulb is just a piece of 1.5 liter of soda or softdrinks plastic bottle filled with a solution of purified water and liquid bleach that harness solar power or that provide light from the sun. Per solar bottle bulb provide 55 watts of light from the light of the sun during daylight and much even higher if the sun do really shines so brightly during the day. Moreover, every solar bottle bulb last up to five years before the solution on the bottle can be replaced. Wow, that is really could save a large percentage of your money for electricity bills if you are using light bulbs during daylight.

The solar bottle bulb is fixed in a hole on the roof with half top exposed on the sun outside. The light from the sun then refracts into the solution in the bottle which creates pure white light inside the house.

However, in the contrary, no matter how promising and helpful this green technology for most poor families in the Philippines, the Energy Industry will not allow such green alternative to dominate the supply of light in the world else they will get bankrupt. But one is free to use and apply such powerful alternative if one desires to save money from one’s monthly electricity bills.