Why Palawan Philippines is called the last frontier of the Philippine archipelago? Probably, because of its most protected and preserved areas. Such as the Calauit Game Preserve and Wild life Sanctuary where you could find exotic African animals and some endangered endemic native animals of Palawan. However, you could still visit this place only of course with a tourist guide and consent of local government. Aside from this wild life sanctuary, you could see the seven lakes at Coron Bay, Busuanga Islands at Coron Reefs where it is surrounded with craggy limestone cliffs. 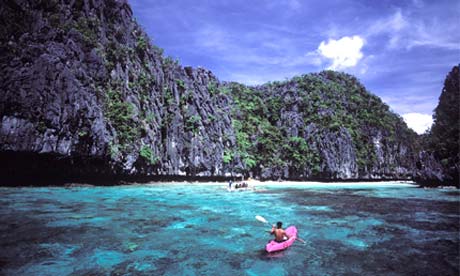 Perhaps, the most famous beach resort at Palawan Philippines is the El Nido Beach Resort, however, just like the protected ecological sites we have mentioned above, this resort is also protected. It protects the giant clam garden and the endangered Philippine cockatoo. The giant clam garden are large marine life on the shallow coral reefs of the shore, this marine life are called clam.

The beach resorts you could found at El Nido Palawan are: (1) the Miniloc Island Resort, where you could see a peaceful turquoise-green waters with a backdrop of limestone cliffs. (2) the Lagen Island resort, (3) the Pangalusian Island, (4) the Vigan Island resort, which is also called the as the “Snake Island,” because of its fine natural sand spit (the s-shaped sandbar), (5) the Secret Beach at Matinloc Island and,(6) as well as the Kulasa Beach at Matinloc Island also.

Aside from what we mentioned above there is also another protected area in Palawan Philippines, the Malampaya Sound Land and Seascape, where you could see the bottle nosed irrawaddy dolphins.

By the way, Palawan Philippines is an island province at the Visayas region of the Philippines. How to get to Palawan? You could fly from Manila Philippines into its capital – the Puerto Prinsesa city and from the main capital city do a land travel to the destination you wanted to go at Palawan, however, you should ride a boat going to the Beach islands, for example, of El Nido’ s beach islands.