Can I ask what is the difference of Jose Rizal to Manny Pacquiao and Ms. Charice Pempengco? Yes, the intelligence and martyrdom but the international fame and almost idolatrous adulation of most Filipinos to Jose Rizal are almost the same, right?

Recently, another weird adulation and worship was given to Jose Rizal at his 150th birth day when a two new statue of him was unveiled First, at his hometown Calamba making it as the tallest Jose Rizal statue ever plus with a solid advice from hypocritical Philippine president PNoy advising the nation to follow Rizal’s “tuwid na daan” DAW.

Meanwhile, the other new Jose Rizal statue is more excessive in terms of worship to Jose Rizal, the one erected at Daang Reyna at Las Pinas and Cavite which was desired to be the new symbol of the new Philippines by its Russian sculptor Gregory Pototsky.

This new Rizal statue depicts a young Rizal (a young boy) in a jubilant outstretched hands pose which according to the great grand niece of Rizal that the new statue depicts freedom; freedom from ignorance which is indeed ironic to the current situation of the general masses of the Philippines. 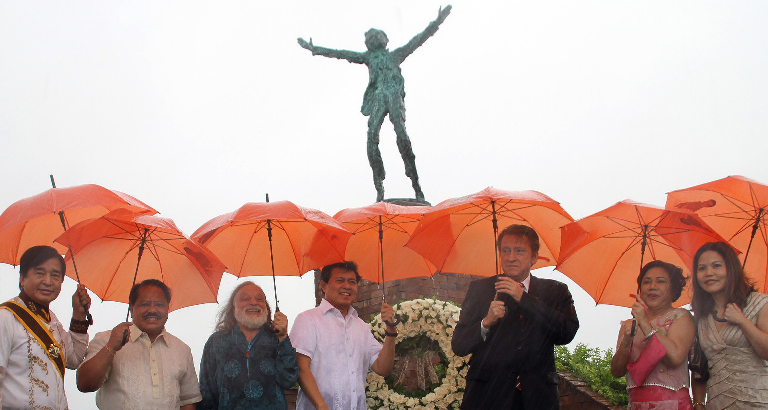 The young JR on his boyish statue at Daang Reyna

However, according to Villars who funded the sculpting of the new Rizal statue, it is a statue that will inspire the students to pursue education and knowledge as well because that is what Jose Rizal has been advocating when he still alive. But is it only Jose Rizal the only Filipino advocating education and knowledge during his time, what about the other Filipinos who have the same aspiration and advocacies then but was not fortunately sensationalized and given much attention just what was given to Jose Rizal? This is indeed unfair and bias idolatry of one Filipino; Rizal should be ashamed or will be ashamed once he learns such excessive adulation on him.

Furthermore, to complicate more Filipino’s inclination to excessive idolatrous acts is the Russian sculptor’s statement that his new Rizal statue depicts Rizal’s “flight to eternity” which is “Owh!” so hyperbolically delusional and untrue which of course Rizal’s fanatics will be too much overwhelmed with hallucinations regarding such compliments.

No offense to Rizal worshipers in the Philippines as well as foreigners who admire Jose Rizal, think about this: Is Rizal the only Filipino who fought for freedom during the Spanish occupation in the Philippines? Is he the only leader then? Be fair to other Filipinos who never given such great compliment though they truly fight with their blood during the Spanish occupation.