Have you heard her success? 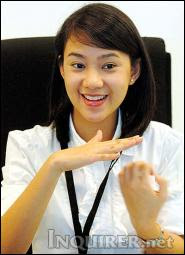 Ana was born deaf and grow up as she was born by her mother who struggle to make Ana hear and speak but to no avail, Ana’s mother was not successful though a specialist doctor recommend a hearing aid which Ana could wear so that she will hear sounds and could eventually speak. According to Ana’s interpreter who is using a hand sign language to speak to Ana, she felt uncomfortable wearing a hearing aid because of the loud noises she hear wearing it. Thus, because of her parent’s failure to make her hear and speak, just accepted the fate of her daughter and enrolled her at the Philippine School for the Deaf instead, to avoid discrimination from a common hearing school. From the school where she belongs, she becomes a class valedictorian.

However, on her college years before her parents heard the Program of De La Salle – College of Saint Benilde (DLS-CSB) regarding deaf students, she was enrolled in a common college schools wherein she have a not so pleasant experiences.

Upon her parents hearing the program of De La Salle – College of Saint Benilde (DLS-CSB)’s School of Deaf Education and Applied Studies or SDEAS from parents who have also deaf children, they enrolled Ana.

According to Ana herself, a deaf person could also do anything like a normal person except only to hear. Moreover, Ana also says “..Communication with our hands should not make a difference..We are not different breeds because of our disability.We also want to live in a society where people will not stare or frown at us or treat us differently…”