1. Taal Lake’s so-called “FishKill”. The mysterious (actually it is not mysterious but there is valid reason or cause for it) so-called “fishkill” in Taal Lake Batangas, which slowly becoming a pandemic within the province of Batangas affecting and spreading already within towns and cities over the weekend since its existence on the Taal lake, have already mark a bad impact on the fish industry in the Philippines and people already afraid to eat the most affected type of fish – the milkfish or bangus in Tagalog word – which is the most eaten fish by Filipinos. Moreover, not only the milkfish is greatly affected by this so-called “fishkill” but also the other favorite type of fish most Filipinos love to eat – theTilapia. 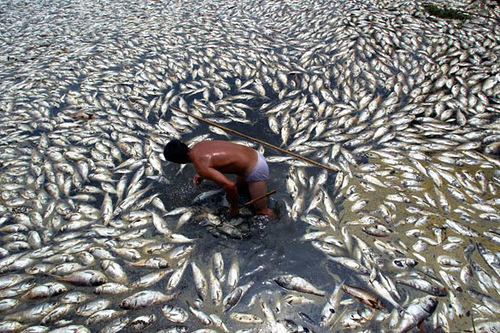 For the main suspected reason is “overfeeding” the fishes caged on the lake with wrong food or feeds type because this type of feeds some sink on the bottom of the lake and become a waste product which in turn contributes to the lost of oxygen percentage within the lake which suffocate the fishes, thus causing so-called “FishKill”. There are said to be two types of fish food or feeds: (1) the floating kind and (2) the sinking one type of feeds.

In case of “fishKill”, the fish cage operators uses the sinking kind of feeds because it is more cheaper than the floating one type. The sinking one is a sticky pellet that is made of “chicken manure” that breaks into fine powder when it combines with water. This type of feed since its main ingredients is “chicken manure” is of course rich in nitrogen component that triggers the birth of weeds in the lake that adds burden on the oxygen percentage on the lake.

The only solution on this “fishKill” phenomenon is for the fish cage operators to realized their own mistakes and “greed”[??] (To harvest more fish to sell without much care for the ultimate welfare of the fish by inducing too much feeding of the fishes) and start rehabilitating the lake or their fish cage.

2. Opening of Classes. Last June 6,public schools and even private schools in the Philippines have started the annual class school openings headed by primary and secondary classes which then followed by tertiary levels or college classes.

It's back to school time!