If there is an indie film with indie directors and indie actors, why not also indie schooling, is not it?

And indeed why not, because a true-blooded Pinoy have won previous a prestigious award from CNN Hero of the Year for 2009 as their present awardee for dedication to bring education among the less fortunate street children in the Philippines by giving them a free independent schooling experience by his mobile ‘kariton” classroom. Wow, that is really great, is not it? 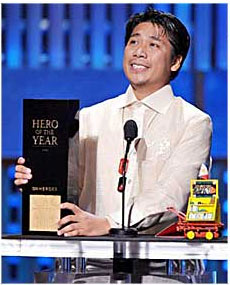 Of course, my report about him is already late, because for sure not only the entire Philippines but also the world already knew whom I am talking about, that is, the young and fresh Mr. Efren Penaflorida. At the very young age, according to him he have already suffered like the an ordinary child of his age and learn early the value of life and education especially which fuels him to establish his “kariton” classroom together with his Cavite National High School friends that aims to divert the attention of every aspiring financially poor children and students from joining notorious gangs, groups, and fraternities but rather to focus on their schooling and education.

Together with his high school friends and with his mentor, they organized a friendship club named the Dynamic Teen Company (DTC) in 1997 wherein at first it only have 20 members, but now according to him, a thousand members and still growing. Thus, because of this humble effort of him, he was awarded as a modern day hero of CNN, which is indeed brings great pride to the Philippines.

Efren Penaflorida is one of the young Filipinos that are awarded as one of the Bayaning Kabataan Award of the Gawad Geny Lopez Jr. Bayaning Pilipino 2004 before he won an award at CNN which he still aims the same. It was his award as one of the 28 heroes of the year of CNN that makes him popular and his works become nationwide in the Philippines and have been conferred with the Order of Lakandula Award by the GMA administration last year.

Education indeed is not confined within the walls of mainstream schools and universities but it can also be done outside of it and independently without so much money in one’s pocket or even if one is poor. Poverty is not indeed a hindrance if one is persistent to learn and be educated; Efren Penaflorida proves this by his “kariton” classroom.